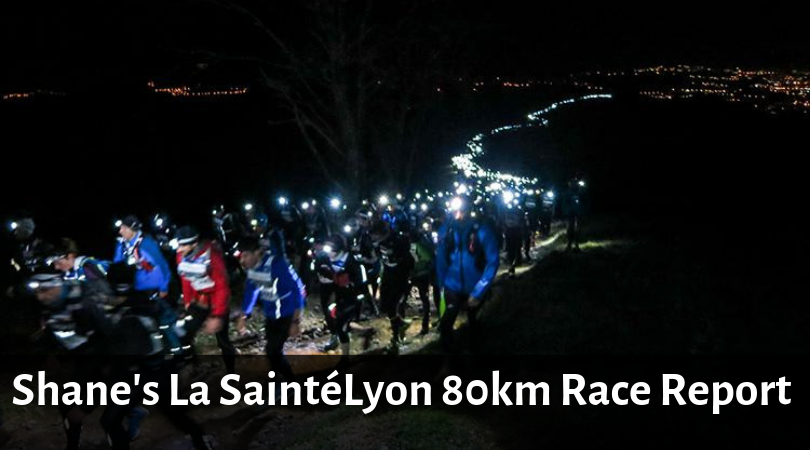 Feels like ages ago but the hurt is still there. After previously doing a 110k Ultra I approached this run with a different mindset. Sure, it was only 80km and only 2000m of ascent, how hard could it be?

Leading up to the La SantéLyon 80km race 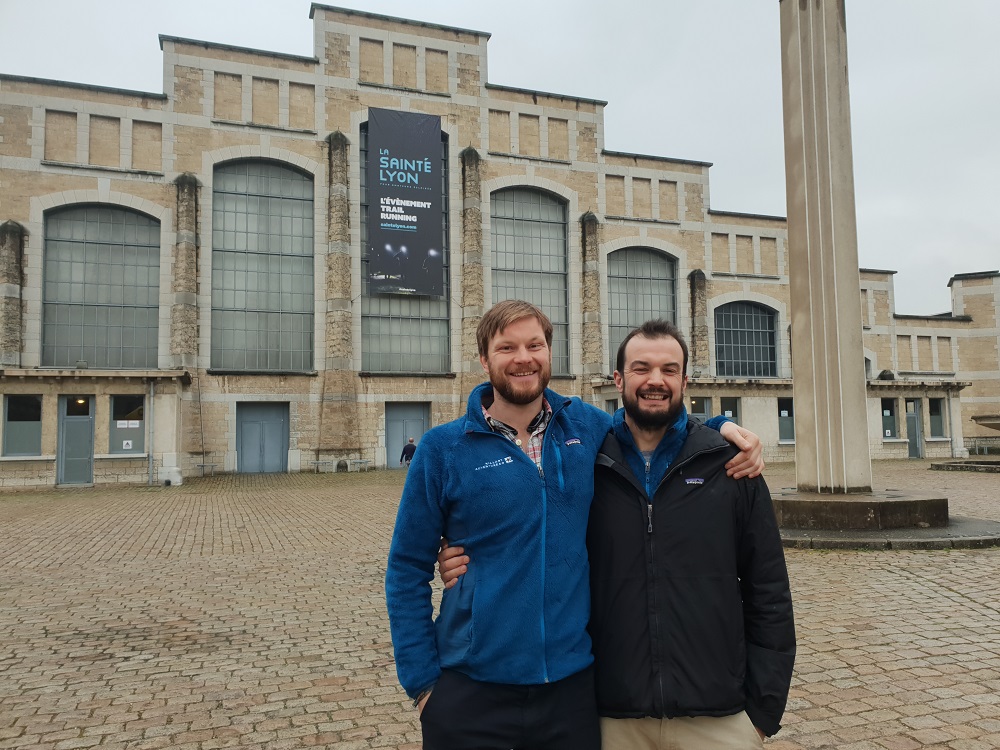 Shane and Jerome getting ready for La SanteLyon

The Journey to Saint Etienne to the start line was nice and easy, thanks to our local contacts we were put up with the lovely Pierre and family who looked after us and got us feed and ready to race, we also got free motorway travel thanks to our friends the 'Gillet Jaunes'.  It is weird knowing that the race is starting at 11pm you spend the whole day not knowing whether to sleep or keep moving.  We arrived into the main hall in Saint Etienne ready to race but a little bit early, or so we thought, 1.5 hrs before the start and the starting chute was already beginning to fill up.  Jerome and Pierre were happy to stay near the back but as I was hoping to go a bit faster, I snuck up to near the front of the queue and jumped in.  I was sure that I had got the time wrong and it was starting at 10 because at 9:45 there was easily about 1000 people in the starting chute.  But no, we waited and the chute started to fill up.  Over 7000 people in the end came along and just filtered in at the back.  I was very happy to be near the front having never run with this many people before.  After a brief 5 minute warm up in a cramped space I was ready. 80 Km here we go.

80km here we go at the La SantéLyon

It’s a varied race with the first kilometre through the streets of Saint Etienne, my plan was to run free for the first 10 minutes and then settle into my race pace of around 140-150bpm and 10km an hour.  This plan went really well for the first 10 minutes then since I was feeling good (obviously as I had just started) I kept the heart rate up at around 155 and ended up doing 12km in the first hour. Great! The race route narrowed down to single track and farm roads which I preferred to the tarmac variety but it also got a bit hillier and the night started to weigh in on top of us. The Irish weather we had been expecting started to arrive with horizontal rain and a bit of wind to keep us moving along.  In the bad years they have snow so I kept telling myself that a bit of rain is not that bad.  Onwards and upwards feeling good as I tried to keep my pace at under 6 minute kilometres.  I tend to look at pace and Heart rate while racing as if you look at distance or time it's just too depressing (until you are past half way).

As time went on the pace slipped out past 6 so the new resolution to keep it below 6:30 was born and then this too slipped past and I said I would definitely keep it under 7min Kilometres.  Unlike others I have no problem with running at night under torchlight, Jerome and I do most of our training early in the morning when it is still dark.  It is actually quite cool to look behind you and see this big line of torches spread out on the tracks behind you.  With food stops every 25km there was no danger of going hungry or thirsty on this race. One nice touch they do is no distance to go markers until you are 30km from the finish, then the last 5km have it every kilometre.  Although I swear their measurements were off as I definitely ran more than 5km in the last section!The last 15 kilometres were torture as my Achilles on one leg, and the calf on the other had progressively being getting worse throughout the race. Now my IT band was feeling left out so it came in so bad it actually reduced me to a slow shuffle interspersed with bouts of slow jogging.  Luckily help was on hand in the form of supporter extraordinaire Joan Mulloy, she called me weak and questioned my masculinity, told me to toughen up and generally provided inspiring talks at each nutrition point.  It's the little things that get you through, knowing somebody will hold it over you forever if you don't finish is definitely one of them.

The Finish Line at the La SantéLyon 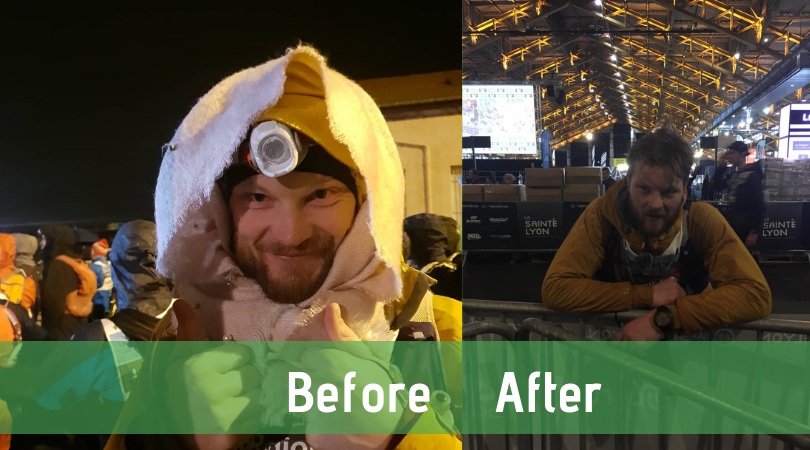 The finish line is in the middle of Lyon in a massive convention hall.  The last 5km of my even slower walk and jog had me thinking I had slid right down the leader board and away from my goal of top 5%.  This compounded with my inability to run was incredibly frustrating as I was passed by person after person.  The organisers had kindly put in one last hill just before the finish which allowed me to really hit the low points.  My 7 min kilometres had been replaced by now with resolution to definitely this time keep it under 7:30 min kilometres.  The finish line had never looked so sweet only one bridge to cross and a few city streets to conquer.  The finish has lovely tiered seating overlooking the line as we arrive in at 8am there was about a 1000 people there to welcome everyone over the line.  Despite all the hardship and pain, it is always an exquisite feeling to cross the finish line of an ultra.  You know the body has very little extra to give and you just enjoy the feeling of not actually having to move.  All in all, a very enjoyable race and this time the 'never again' talk only lasted a week or so.

Many thanks to Jerome and Pierre for choosing to run with me (I did buy Jerome the entry for his Birthday so he didn’t really have a choice) and to Joan for support and encouragement along the way.  Especially up those stairs in the evening, never has it been so difficult to climb 10 steps up.