Even with the best intentions in the world, I did not manage to get a full night sleep or at least 6 hours before my first 110 km ultra-marathon in the French Alps. The rental campervan was overheating and I was tossing nervously all night thinking about what was going to happen to me once I hit the 70 km mark.

Why 70km? That was the furthest I  had ran so far, which was a year ago and in the Austrian Alps where the weather was quite like Ireland at the time, cloudy with scattered showers  and the occasional burst of sunshine!  Where as in France the weather was looking amazing, 30C which would be perfect  if you wanted to spend your time on a towel along the side of the well know Lac d’Annecy with a local craft beer in your hand, however, it was not ideal for running an ultra-marathon of 110 km and 7000m assent!!

But it was too late to be worried, I had to get up, make a coffee, drink some water, listen to some tunes and get ready. There wasn’t much to say between my wife, my brother in law and myself on the way to the starting line, just a bit of music and me trying to enjoy  the ride. My wife was there as support crew, she is amazing, and as you will see later she is really amazing and knows me to perfection!!! As for my brother in law, he has been my training buddy for two years and if he was not there to train with and push me  I don’t think I would have been able to undertake such a challenge, so thanks Shane. 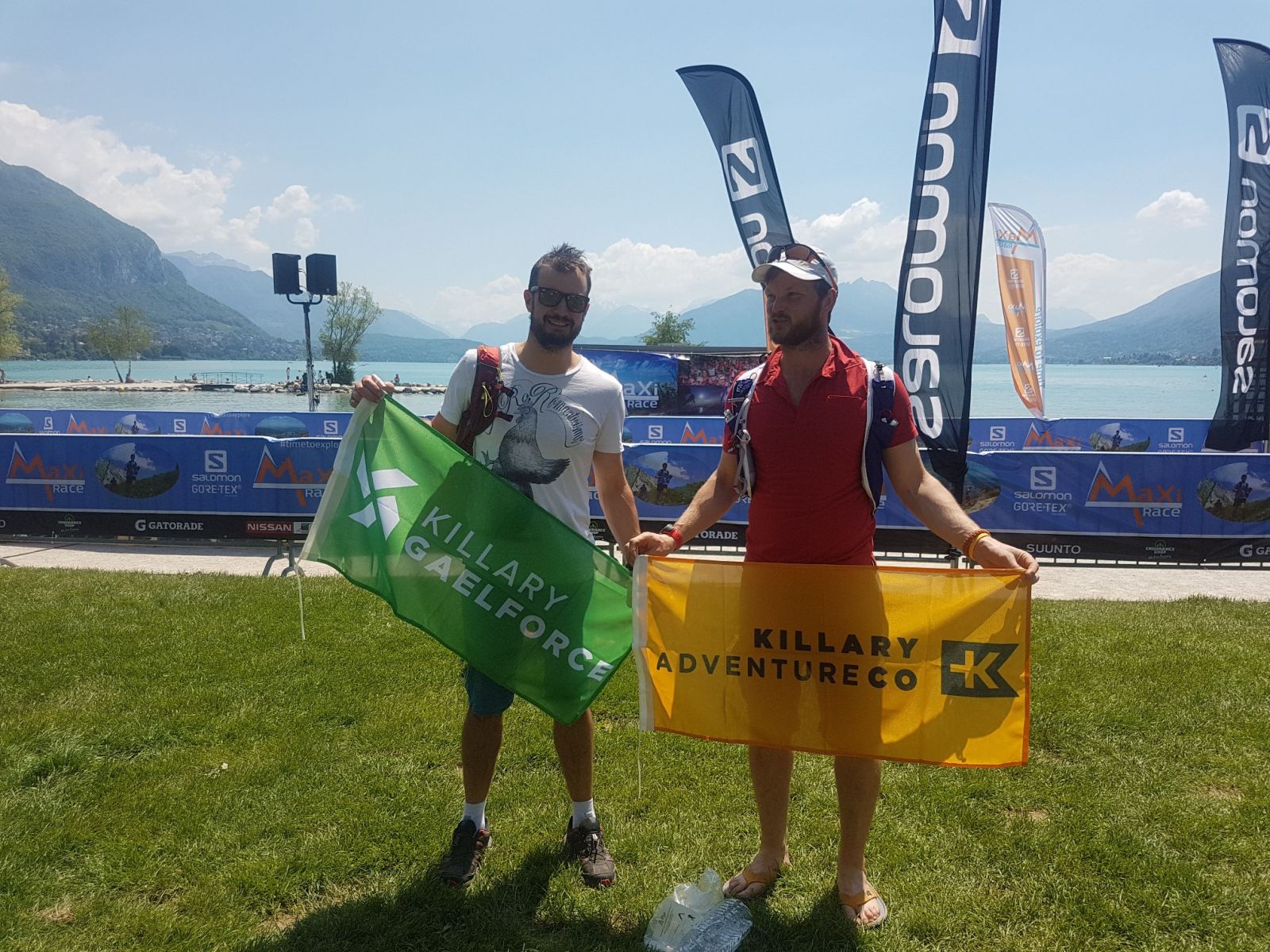 At registeration with Lake Annecy behind us 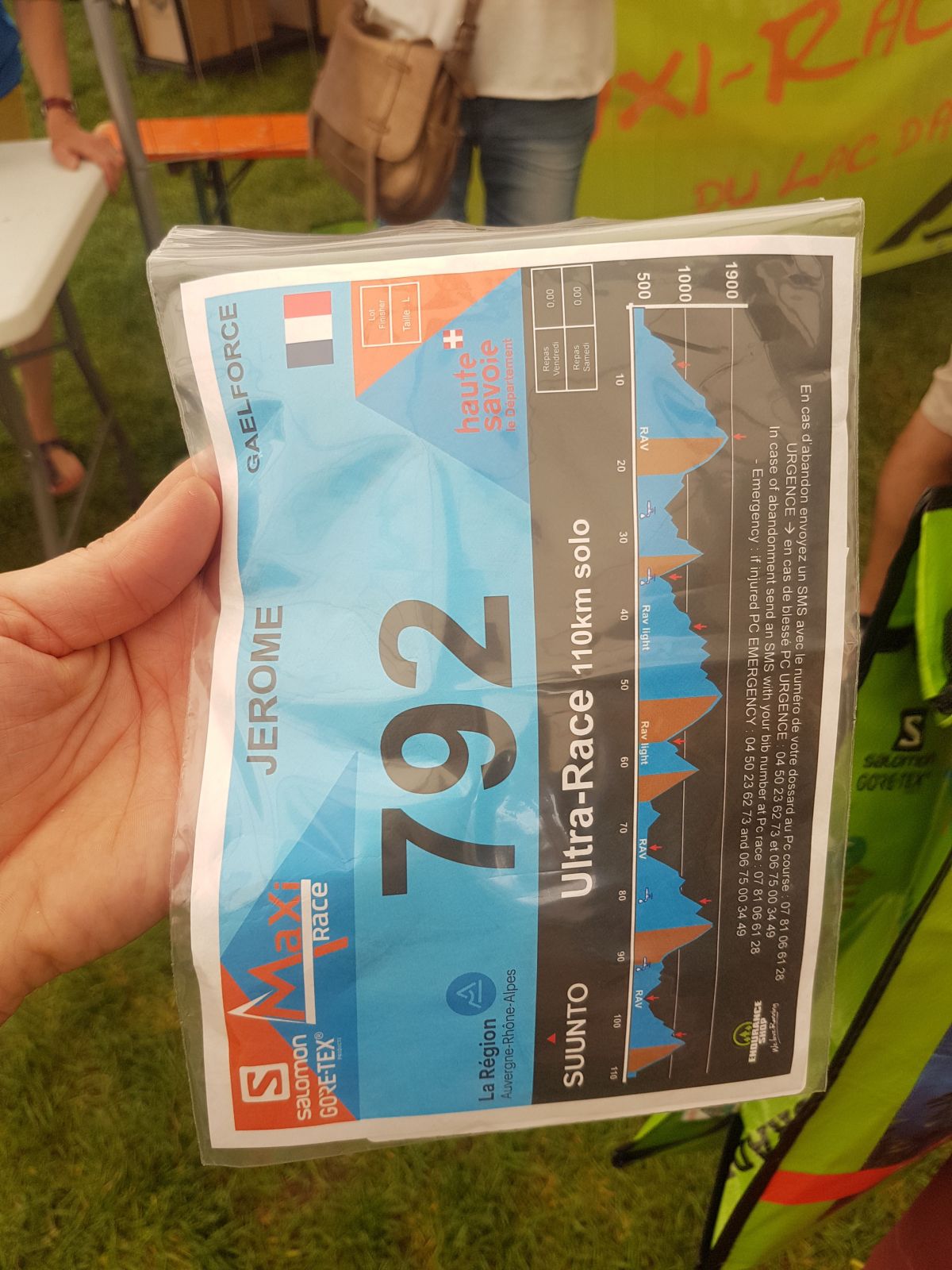 Our race numbers with the route profile on them....!

So we are on the start line, its 1 am, the start is at 1.30 am, plenty of time to stress and question why in the hell we are doing this? But the answer was simple for us both; why not?? The mountain and lakes look spectacular and the adrenaline starts pumping when you see your fellow competitors jumping around at the start line.

Allez, Allez, Allez, this is it 1.30am and we are off starting our long trip around the lake d’Annecy. I managed to stay close to shane for the first 3 km but then my heart rate went above 135 bpm so I could not follow him. I had to run my own race and not do my usual stunt of thinking that I can keep up with him, because I can't!  This was the last moment I saw him until the end of the race 24 h later.

The first 20 km were in the dark, uphill all the way to the semnoz summit, head torch on, between hundreds of people (yes  I forgot to mention that there were 750 runners competing in the race) we ran/walked through the forest in a single line. This was nice easy pace and a good warm up. I arrived at the summit which was the first food stop with cheese and bread were waiting for us with some soup and energy drinks but what more do you need than cheese and bread!!! Anyway past the food stop and I started the first major downhill and had my first technical malfunction, my head torch started flashing to let me know that the  battery was flat, I could not believe this as the battery was new from the previous afternoon.  This meant that I had to run alongside other people as I could not see very well. Not to worry, I took it easy and at the next stop would give it to my wife to get it sorted before I needed it again in the night.

The downhill went perfectly fine and up we went again, I was enjoying every moment, no pain, just running free in the nice morning light and perfect temperature. Iit was spectacular, the views were to die for, and I was feeling great. At the next stop I saw my wife, she updated me on shane who at this stage he was half an hour away. I drank some water and off I went again, I wouldn't see her again until the 76 km mark.

Myself and Shane at the startline

The next 40km went surprisingly well, between the beautiful views and the chat between fellow Frenchmen regarding the race, politics, jokes, it was very enjoyable. But I was still thinking of what was going to happen at km 70, will I be able to keep going or am I going to drop to my knees. At this time I was in good shape, powering uphill and taking it easy on the downhill.  I arrived in km 76 feeling a bit tired but fresh and ready to do another marathon!!! (well that’s what my mind was thinking!!!).

Ciara was there with supplies of avocado sandwiches, fresh clothes and her wonderful smile. At this point  of the race I was on track to finish under 22h which felt amazing, as on my previous race I finished the 70km in 15h, here I was after 76 km at 13h, what a feeling! All the trainings done in the dark, cold and windy mornings was finally pay off and I had the added bonus of still feeling fresh ( well that what my mind was thinking!!!). So I said to Ciara, sure I should be over at the finish line around 10 pm….. Ciara’s answer to it was quite simple, yes no problem I will be there (in the back of her mind, she was saying not really you still have a marathon to run so we will see) but she let me believe it!!

Second technical issue just came after restarting from the food stop, for some reason, I change my cap to a buff, it was 30 degree and I was boiling, why did I not listen to Ciara when she told me “are you sure that you don’t want to keep your cap it's still hot out there” and again I did not listen, and for the next 20 km I regretted it hugely. 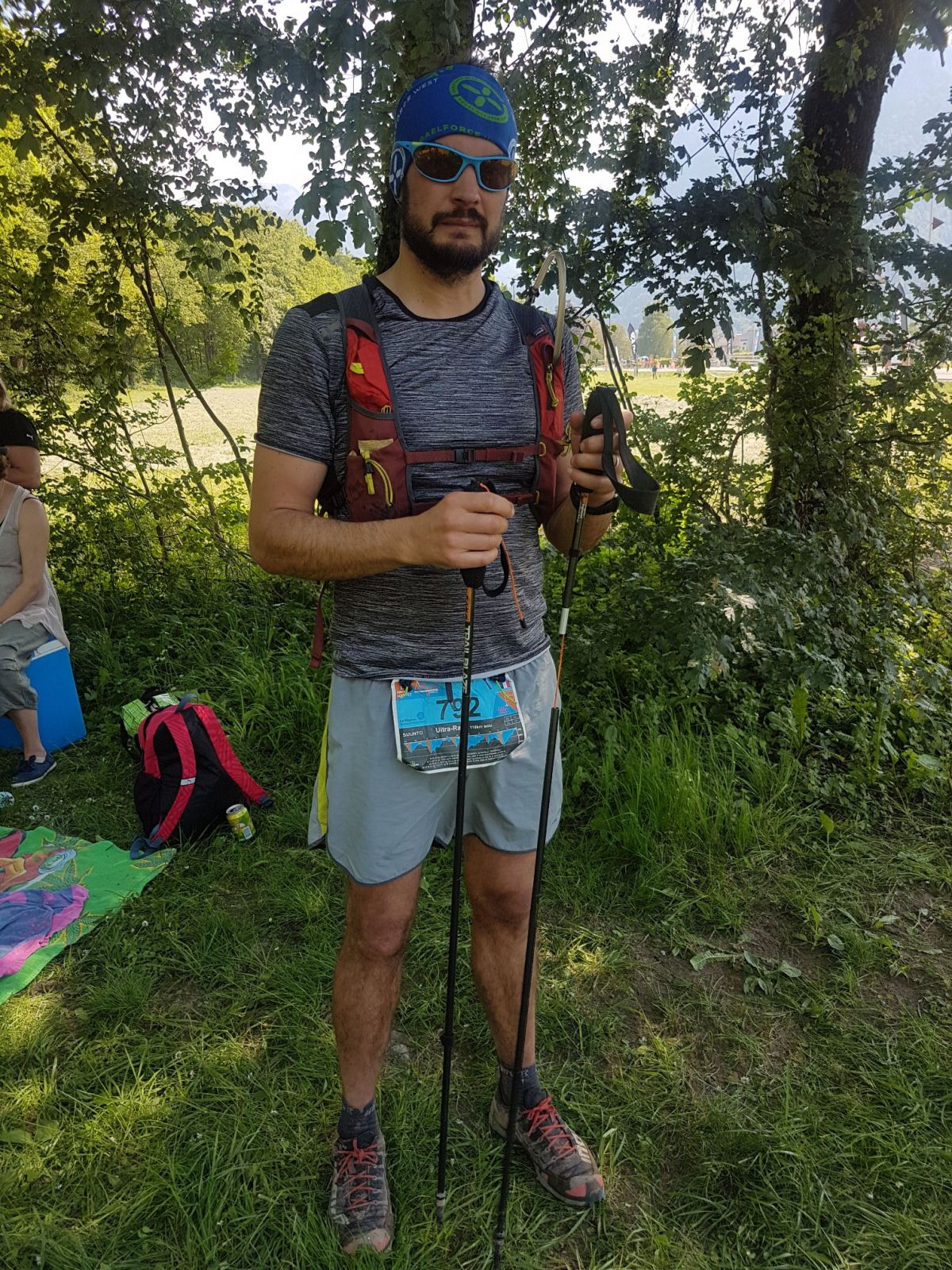 Just after km76 we had to climb all the way to 1850m from 500m, on a 13% gradient hill, (remember when I said my mind was thinking that I was still fresh) well, this is when I was wrong, I figured out that I went too fast on the first part of the race and I was paying the price now. Still I kept going but I wasn’t really enjoying it anymore as it was all up for the next 20 km and some big downhill were waiting at the top.

At km 86 my legs were burning downhill, I could not run downhill anymore every step was sore, but still I had to keep going, the finish line was too near to stop now. I arrived into km 96, the last stop before the end in bits, I was sore everywhere, it was getting dark, I could not manage to eat the other avocado sandwich, the only thing I could eat or drink was Pepsi and crisps and even this was hard. I had had enough, this was the end for me, specially as at this time I was at 500m and I had to climb up to 1300m for 6 km to go down for another 8 km to the finish line. The idea of DNF (did not finish) appeared into my mind, I started saying to myself “sure you've nearly done 100km its okay you've proved your point". But no I had not proved my point, I had not done 100km and if I quit all the effort would have been for nothing, I couldn't do that too myself, too my wife or my brother in law, we had worked so hard in the last 6 months and it would be a total disaster if I DNF, therefore I picked myself up  and of I went again.

During all this time at the food stop, Ciara was beside me, and did not mentioned anything about giving up, or giving me a ride back to the finish line, but instead she was trying to encourage me, massaging my legs and telling me how proud she was and that I was doing great, surely I can’t give up now.

So off I went this was the longest 10 km in my life, the first 6 km were hard, I had to stop at least 20 times, I even fell asleep for 20sec on a road just before the summit. Once on the top, the hardest was not behind but in front, the organiser of the race ( as much as I had to say that it is an amazing event and so well organised) they left the hardest and most technical downhill  last and man it was tough, between roots and loose rocks, branches across the trails the descent was a nightmare and a never ending nightmare at that. I think it took me about 1h and half to 2 hours to go down to the flat, and run another 1km along the lake to the finish line. The last km was, as I remember ok, it was flat and on the tarmac so no thinking just one foot at the time and here I am crossing the finish line after 24h and 19 minutes.

I can't lie it was tough and it's probably the hardest race I ever done, but what an achievement. Thinking back on it now after more than a week I have a smile on my face, it is an experience that I will remember all my life, I cannot say I love every moment of the race but if you ask me will you do it again? The answer will be, sure why not but next time maybe even longer... 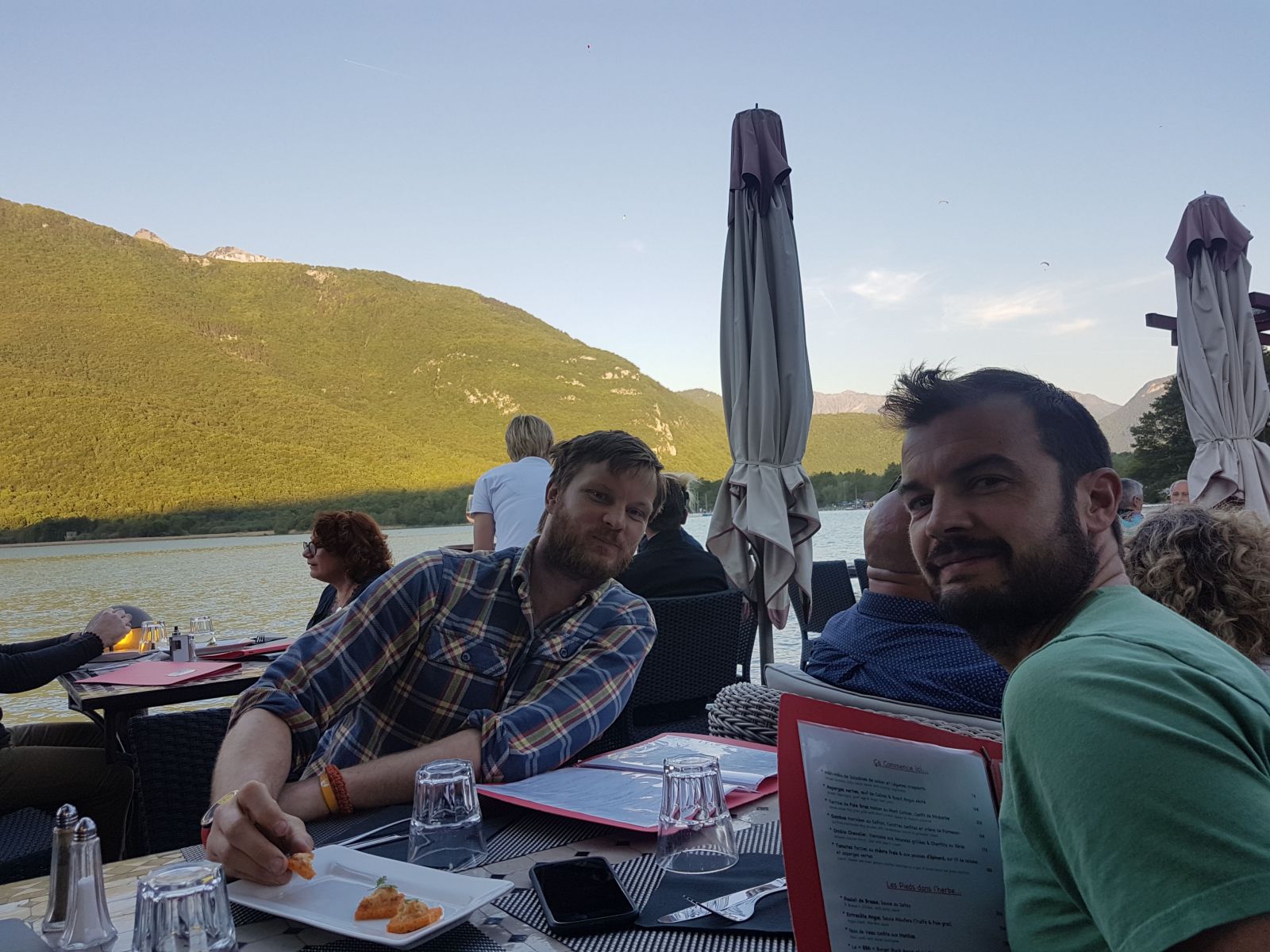 ​Enjoying a well earned meal the next day!